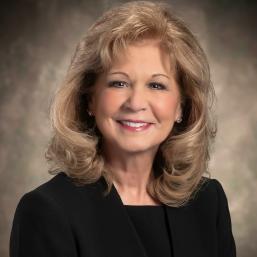 Pueblo native Patty Erjavec has served as president of Pueblo Community College since June 1, 2010. She oversees PCC’s main campus in Pueblo as well as its Fremont Campus in Cañon City and its Southwest campuses/sites in Mancos/Cortez, Durango and Bayfield. She is the school’s first female president.

Her primary areas of emphasis during her tenure at PCC have been improving student access, retention and graduation rates. She gained approval for bond issues that created a modern Learning Center on the Pueblo campus as well as an expanded, student-approved College Center that includes a Career and Transfer Center. Both projects directly target student success by providing more learning resources and enhancing student life.

In her first year at PCC, Erjavec introduced the annual Celebration Walk. It has become a tradition on the first day of each fall semester to congratulate students for taking the first step on their journey to success.

She was the catalyst for the school’s adoption of the PCC Promise, which promotes a college-wide culture of helping and respecting all students and staff while celebrating their accomplishments. Major initiatives accomplished during Erjavec’s tenure at PCC thus far include:

Under Erjavec’s leadership, concurrent enrollment has grown exponentially to include expanding a rural Pathways in Technology Early College High School from one community to a region in Fremont, Florence and Custer counties. Erjavec has championed PCC’s Return to Earn program, which has garnered national recognition for its ability to re-engage students to complete a degree. Erjavec continues to be actively engaged in supplemental funding efforts which to date have yielded more than $35 million in capital construction/renewal, controlled maintenance and emergency funding projects.

Prior to coming to PCC, Erjavec worked 11 years at El Pueblo … an Adolescent Treatment Community, including the last nine as its president and CEO. Under her leadership, El Pueblo evolved into a Center of Excellence, noted for providing high-quality care in a continuum of residential and nonresidential services. It also became an accredited behavioral healthcare facility and was licensed by the Colorado Department of Human Services’ Division of Behavioral Health to provide substance abuse treatment. She oversaw the construction and renovation of 11 therapeutic cottages and several other support services on El Pueblo grounds. Under her direction, capacity increased by 50 percent.

Before working at El Pueblo, Erjavec was employed in a variety of positions with PCL Packaging, Inc., including six years as its general manager.

Erjavec served more than eight years on the State Board of Community Colleges and Occupational Education, two of those years as chairperson. She currently serves on the boards for US Bank and the Pueblo Economic Development Corporation and chairs the One Pueblo – Talent Pipeline initiative. She is a member of Rotary No. 43 and a former board member of the Sangre de Cristo Arts and Conference Center, the Colorado Association of Commerce & Industry Education Foundation, the Colorado Association of Family and Children’s Agencies, St. John Neumann Catholic School and the Workforce Development Board of Pueblo, Huerfano and Las Animas counties. She also has contributed to numerous other local and state boards, committees and agencies by serving as a chair, officer or member.

Erjavec has been recognized by several organizations for her professional and personal contributions. She was inducted into the Pueblo Hall of Fame in 2010 and the South High School Alumni Hall of Fame in 2008. In 2005, Erjavec was named Administrator of the Year by the Colorado Adolescent Mental Health Coalition and in 2003 she became the first woman to receive the Greater Pueblo Chamber of Commerce’s Charles W. Crews Outstanding Business Person of the Year Award. That same year, she was recognized with the YWCA Anna Taussig Award for her work with at-risk youth. In 2019, Erjavec was recognized as a Woman of Influence by the Colorado Springs Business Journal.

In 2013, she was cited for her support of students by receiving the Colorado Community College System’s Outstanding President Award and the Dr. Idahlynn Karre Exemplary Leadership in Higher Education Award. She was presented with a Distinguished Service to Education Award by CSU-Pueblo in 2013 for her current and cumulative efforts to aid students. In 2016, she received the Shirley B. Gordon Award of Distinction for her work with Phi Theta Kappa, the community college honor society, and was again recognized at the CCCS Outstanding Community College President.

Erjavec completed her PhD in education leadership (research and policy) at the University of Colorado-Colorado Springs. She holds a master’s degree in nonprofit management from Regis University, where she graduated with Alpha Sigma Nu Honor Society honors, and a bachelor’s degree in business administration with an emphasis in accounting from the University of Southern Colorado (now Colorado State University Pueblo).

She has participated in leadership programs with the Center for Creative Leadership, the John F. Kennedy School of Government at Harvard University, El Pomar Foundation and the Greater Pueblo Chamber of Commerce.