A longstanding partnership between Pueblo Community College (PCC) and EVRAZ Rocky Mountain Steel continues to churn out dozens of skilled tradespeople each year, helping the “Steel City” power one of its largest employers as it prepares to ramp up production.

The PCC and EVRAZ apprenticeship program teaches employees millwright, electrical systems, and other high-tech trades that keep the steel facilities humming. After four years of classroom instruction and on-the-job training, apprentices qualify for advanced roles and see a 32% increase in their hourly wages.

“We’re really focused on upskilling and continuing that lifelong learning for individuals who are already in industry and helping them move up in their career,” said Amanda Corum, executive director of PCC’s Pueblo Corporate College. “We want to keep that talent local.”

Apprenticeships aren’t new to EVRAZ, which ran an in-house program in the 1970s that eventually lapsed. As more employees neared retirement, the mill approached PCC to help them retool its program for the 21st century, Corum said.

“They came to us with a really good map of competencies and skills, and we were able to then use that information and have additional conversations and interviews with EVRAZ staff to determine what the related training instruction should be,” she said. “Our instructors all come from industry, so they have real world experience. We really leaned heavily on their expertise in those conversations.”

For someone like John Camper, the program was too good to pass up. The former ranch hand intended to go to college but struggled to balance school and jobs as a young man.

“It was very hard to work and go to college at the same time,” said Camper, who participated in the mill’s first apprentice cohort. “Coming to work at the steel mill and being afforded the opportunity to be paid while you’re learning fell in line with exactly where I was in my life.”

We’re really focused on upskilling and continuing that lifelong learning for individuals who are already in industry and helping them move up in their career.

Today, Camper has moved up into a general supervisor position, where he’s responsible for managing the maintenance department. He’s one of the 119 apprentices who have gone through the program since 2005 and now sits on its steering committee.

“For the young men and young women out there who don’t necessarily go or have the opportunity to go to college or can’t afford it, an apprenticeship is one of the best things,” he said. “You learn crafts that you can use the rest of your life.”

Eric Ludwig, an electrician and craneman with EVRAZ, agrees. He found a good job at the steel mill years ago but found it hard to move up without a skillset in the trades. After several friends successfully completed the apprenticeship program, he decided to give it a try.

“I learn better when I get to learn things in class and actually apply those skills at the same time,” said Ludwig, who graduated the program this year. “We were doing programming, checking to see where different controllers were set. It was a nice transition to apply [training] to real life.”

Each week, Ludwig and his fellow apprentices trained on the job for about 40 hours and attended classes at PCC up to 9 hours. The commitment, though demanding, was worth it.

“It was the best decision I made,” he said. “Once you get to the trade side through an apprenticeship, you get to do something different every day.”

As EVRAZ builds its new state-of-the-art long rail mill, the demands for skilled workers like Camper and Ludwig will only increase, Corum said. PCC has already developed custom training for the new facility and will roll out their second cohort in October.

These collaborative efforts are critical to PCC’s mission to transform lives, she said.

“If we can have those partnership with employers, not only does it help to build skills of those employees, but also it’s also an opportunity for us to develop relationships with employers as pipeline where we can send our graduates.”

PUEBLO – Pueblo Community College on Tuesday unveiled the results of a $1.3 million renovation to its welding labs. Representatives from PCC were joined by...
Read More 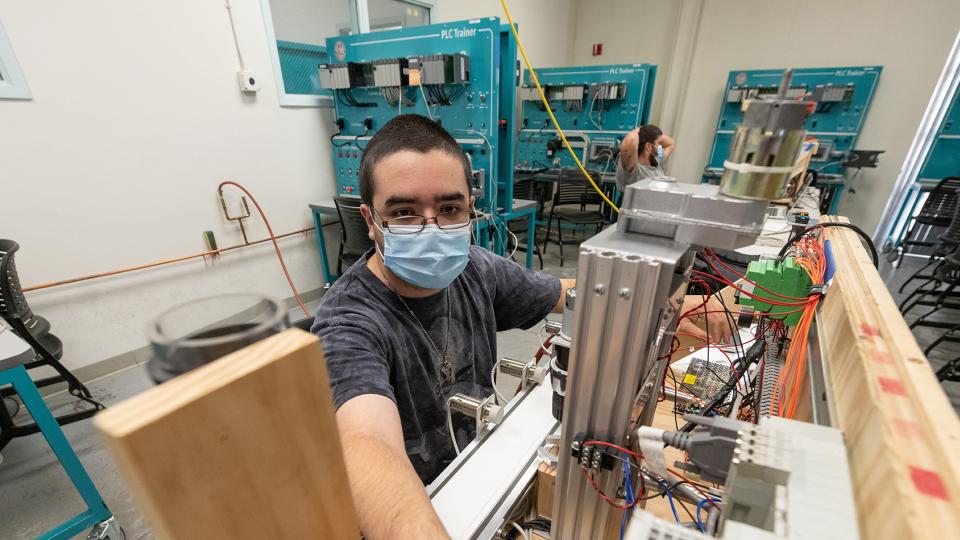 PUEBLO – An impressive group of Pueblo employers and educators joined Pueblo Community College on Monday to announce the launch of the Pueblo chapter of the...